Welcome to the website of the Right to Choose Life advocates, also known as the Eternal Gospel Commission, or EGC. As Christians, we are commissioned to bring the gospel of Jesus Christ (1Co. 15:3-4) to every unbaptized person (Mark 16:15-16). But as members of the EGC, we are also commissioned to bring additional good news to the baptized bride of Jesus Christ (2Co. 11:2, Rev. 21:9), and it is that no longer does "choosing life" have to be a difficult decision for any woman to make. Under the Right to Choose Life Act, every woman with child would have the option of certifying her pregnancy in a manner that takes away the motive for forced abortion, thereby protecting the life of her offspring, as well as her own.

Forced abortion is the illegal act of making a female get an abortion against her will. It happens when the male, who impregnated the female, is abortion-minded but she is not. In other words, he wants her to get an abortion and she does not want to get it. Sometimes, it's a parent who wants her to get the abortion. Screening abortion patients is ineffective at stopping forced abortion, because the patient can easily be coached on how to answer the screener's questions. Moreover, the woman could be in danger of being killed if she refuses to get the abortion. Even in states where abortion is legal, homicide is a leading cause of death for pregnant women, especially when they are not married to the man who made her pregnant.

The motive for forced abortion is the remission of a child support debt, which a male incurs by impregnating a female. The Right to Choose Life Act takes away the motive by letting the woman certify that she is pregnant with the offspring of so-and-so, that their offspring is owed child support, and that she does not want any portion of the child support debt to be forgiven if someone was to kill their offspring by abortion or otherwise, but that the debt instead be converted into reimbursement for wrongful death, payable to the minor(s) specified by her on the certficate. By signing the certificate of pregnancy, she would secure the safety and well-being of her offspring, as well as herself; because no longer would anybody have anything to gain by killing her offspring.

Both the nation and the Church are currently divided into two sides over the legality of abortion (see Figure 1). One side believes that forced pregnancy is a greater evil than abortion, and the other side believes the opposite. But the bipartisan Right to Choose Life Act promises to bring the two sides together behind the common good, because it is common knowledge that every woman with child has the right to protect herself and her offspring from harm. Please help us protect a woman's right to choose life by clicking the blue 'RTCL Petition' button in the upper left side of this page and signing the petition. Anonymous signatures are accepted and only one email is sent to your inbox. More information about the RTCL Act can be found under the 'Topics' menu in the upper right of this page. 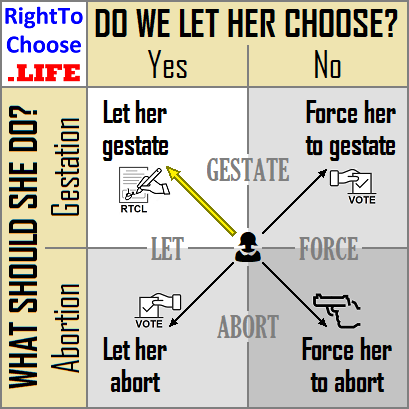 We invite you to learn from God the way we learned, by asking Him in faith for the wisdom of what we ought to do about abortion. If you know that abortion is "the most unholy sacrifice," then you may say that instead of "abortion." God promises that His wisdom will be given to us if we ask Him for it in faith (James 1:5-6, Mark 11:24), especially when our petition is according to His will (1John 5:14-15). The following is a simple prayer that you can pray, asking God for the much-needed wisdom.

Once you have prayed that prayer, please select 'Wisdom' under the 'Topics' menu, so that you can see the wisdom that we received after asking God for it in faith. If you receive it, then you will want to sign the petition. To become a member of the EGC, all you need to do is to sign the petition and convince at least one other baptized person to check it out for themselves. Every member of the EGC is a mediator between the two opposing sides of the divided Church. Our Lord is calling each side to settle with their opposition quickly (Mat. 5:25), and it is our job to help them do just that. Thank you for checking out our apostolate for yourself. We hope that our Father in heaven richly blesses you.

Yours in Christ,
The Eternal Gospel Commission
www.RightToChoose.Life